What an exciting week we’ve had! On Wednesday 22nd April, we attended the Free From Food Awards at the Royal College of Physicians in Regents Park, London. Around 300 Free From enthusiasts gathered to hear who would be awarded the prestigious awards for their products and, of course, who would be crowned the champions of the Free From World and be presented with Marble Mo, the FAIR Trophy for the Best Free From Product.

With such tough competition, we were hopeful for a mere mention at the ceremony, and were so excited when our Traditional Pork Pie won the ‘Foods-to-go’ category! With our new gluten and dairy free Steak & Ale Pie being awarded a Highly Commended in the ‘Meaty Ready Meals’ category too, we were on cloud nine by the time the final award, the overall winning product of the competition was announced. We were absolutely astonished when Michelle Berriedale-Johnson, the director of the awards mentioned that we were in the running for the prize, but when the room was filled with ‘pork pie’ murmurs when she asked the crowd who should win the competition and we were soon after announced as the winners, we almost fell to the floor! We made our way to the stage to collect Marble Mo, who was presented to us by patron of the awards Antony Worrall-Thompson and we were absolutely overwhelmed by the cheers from the crowds! It was such a proud moment for us, having worked so hard for three years to only dream of an achievement such as this.

We want to say a huge THANK YOU to all our lovely, loyal customers, who keep us very busy making lots of pies! Without your continued support, we would not be here today sharing this incredible news with you!

If you have been meaning to try our products but haven’t as yet, now you know our product has been voted the Best Free From Food of 2015, what better a time to do so? You can order our products, search for your nearest stockist or find out about upcoming events here on our website. You can also follow us on Facebook and Twitter 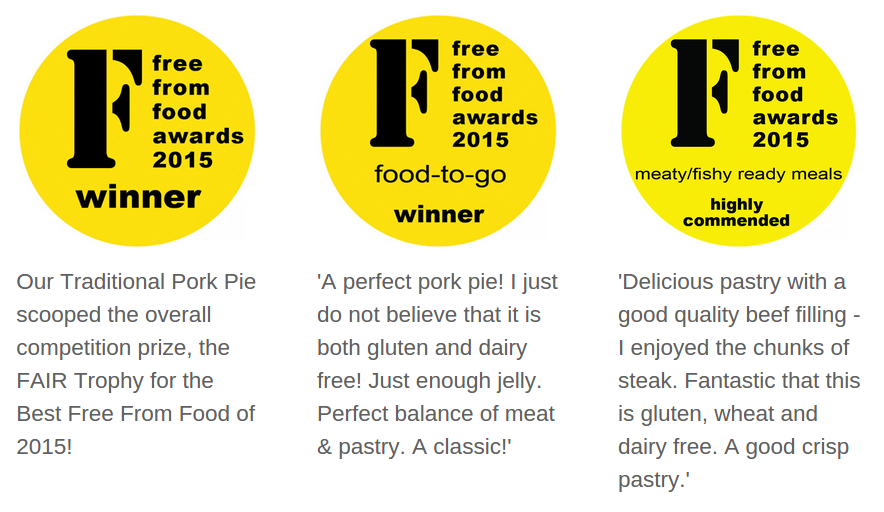 All products are gluten and wheat free

While every care is taken to ensure the information provided on our website is correct and up to date, we are unable to accept liability for any incorrect information displayed. Please ensure you check the label on the product before you consume it, especially if you have a food allergy.